2019 was a remarkable year for investors with many asset classes delivering positive performance. Both the Standard & Poor’s 500 Index, a gauge of U.S. stock market performance, and the Dow Jones Global (ex U.S.) Index delivered double-digit increases (see the below table). Bonds and gold rallied, too, delivering positive returns for the year.

Possibly the most important factor contributing to asset performance in 2019 was an ‘about face’ by the United States Federal Reserve. Axios reported:

“The Fed’s 180-degree turn was the story of 2019, asset managers and market analysts say…Chairman Jerome Powell and the U.S. central bank went from raising interest rates for a fourth time at the close of 2018 and giving market watchers the explicit expectation this would continue in 2019, to doing the opposite. The Fed cut rates thrice and even began re-padding its balance sheet in the last quarter of the year, bringing it back above $4 trillion.”

The Fed’s policy decision gave investment markets a boost, however, it did little to quell investors’ worries about potential recession and the impact of the U.S.-China trade war, reported The Wall Street Journal. As a result, investors moved money from U.S. stock markets into bonds and other investments they perceived to be safer throughout the year.

During the fourth quarter of 2019, U.S. markets delivered positive returns despite uncertainty about the strength of the U.S. economy created by inconsistent economic data. For example, the last jobs report of the year indicated unemployment remained near a 50-year low. Yet, in 2019, workers experienced the highest number of layoffs in a decade.

Many layoffs during the year were the result of corporate bankruptcies, especially in the retail sector. Investors who took time to evaluate the juxtaposition of unemployment levels and layoffs may have recognized disruptions in the retail sector has potential to create opportunities for investors.

A closely watched indicator during 2019 was manufacturing. In December, Fox News reported, “The ISM Manufacturing Index fell for the fifth month in a row to 47.2 in December, down from November's reading of 48.1. That's the weakest reading since June 2009, when it hit 46.3, and well below the 49 reading that economists surveyed by Reuters expected.”

One of the reasons for weakness in manufacturing is the U.S.-China trade war. Late in the fourth quarter, concerns about trade subsided after the announcement of a phase one trade deal. The agreement is scheduled to be signed on January 15, 2020.

Continued progress in resolving the trade war could help boost economic growth in the United States. At the end of 2019, United States gross domestic product, the value of all goods and services produced in the country, was expected to remain slow and steady during 2020. However, forecasters at the Federal Reserve Bank of Philadelphia expected the economies of nine states to contract during the first six months of the new year.

From a geopolitical perspective, the 2020s are beginning just like the last decade did, with all eyes on Iran.

In 2009 and 2010, the Iranian Green Revolution captured the world’s attention as social media provided insight to post-election turbulence and unrest in Iran. Last week, the first of the new decade, all eyes were again on the Middle East as tensions between the United States and Iran flared after the death of a top Iranian military leader targeted by the United States.

After rallying on the first day of the new decade, some major U.S. stock markets declined on news of heightened tensions in the Middle East and concerns about the potential consequences, such as the disruption of oil supplies. 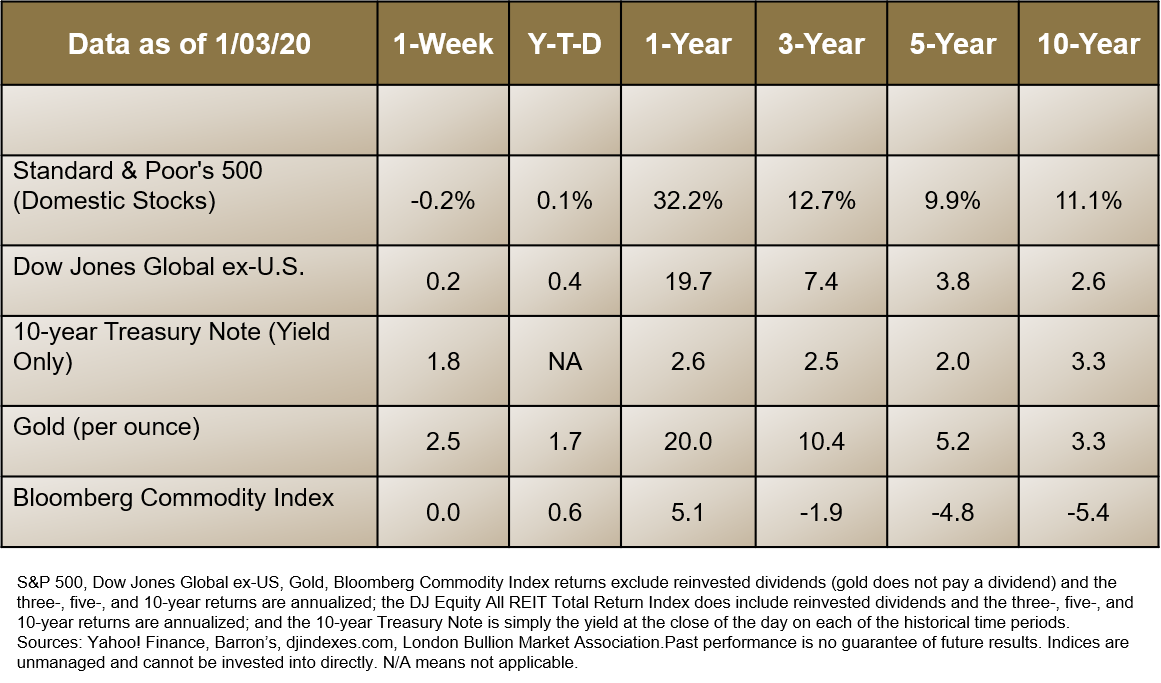 While some have called the 2010s a ‘lost decade’ because there was little economic growth, we disagree with the assessment. The decade was filled with remarkable events in politics, sports, science, pop culture, and other areas of interest. Here are a few memorable events from the past decade:

The 2010s provided disruptions and delights. Let’s hope the events of the coming decade will make the world a better place.