The curtain appeared to close on the first act of 2019 last week – and what an impressive act it was. The Standard & Poor’s 500 Index delivered some dramatic returns and is less than 1 percent away from a new all-time high.

“Trading volume was tepid at best. This past Monday, fewer shares changed hands than on any day since December 24 – when the market closed early for Christmas. Tuesday’s volume was lower than Monday’s, Wednesday’s was lower than Tuesday’s, and...well, you get the point. That was just another sign that no one wanted to place any big bets on the market this past week – in either direction.”

Investors were complacent even though news suggested trade talks with China were progressing well. They remained unruffled in the face of a Presidential tweet suggesting the United States will impose tariffs on Europe in retaliation for illegal subsidies to a European aerospace firm.

There was another interesting development in the United States last week. It was widely reported that a number of companies in retail and banking sectors increased entry-level hourly wages to levels well above the national minimum wage of $7.25 an hour. The companies are paying $13 to $20 an hour, according to Renae Merle of The Washington Post and a report from Reuters.

That is good news for workers, but not such good news for investors since higher wages could lead to lower corporate profits, reported Joe Wallace and Akane Otani of The Wall Street Journal. 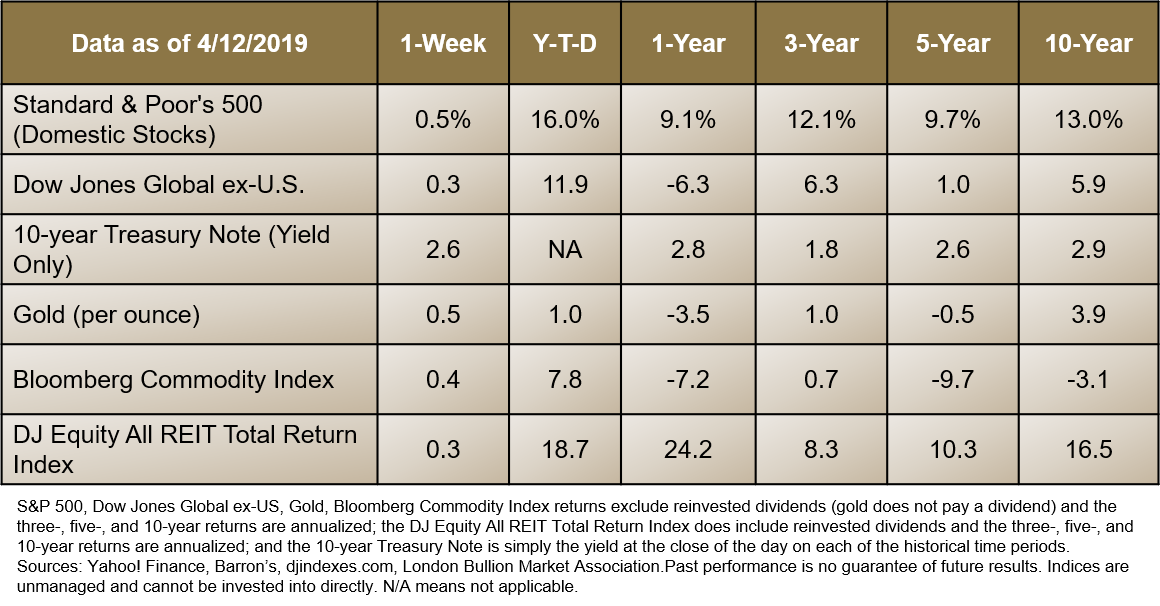 People make everyday decisions based on the information they possess at any given moment, explained The Economist. As understanding of an issue changes, so do the decisions people make.

For example, a lot of people dislike plastic grocery bags. Many shoppers choose to take cloth bags to the grocery store rather than use plastic bags provided by the store. In fact, some 240 cities and counties have laws that ban or tax plastic bags, according to Planet Money, and there is a national movement afoot to ban the bags.

However, the economics of plastic grocery bags is not as straightforward as many believe. Banning plastic bags appears to be an effective solution to a serious environmental issue. Unfortunately, it is not. An Australian economist studied the effects of plastic bag bans and discovered bans helped and hurt the environment:

In addition, paper bag use rose, creating 80 million pounds of paper trash annually. Paper is biodegradable and can be composted; however, producing paper bags requires water, fuel, and trees, so that should be considered as well, reported Stanford Magazine.

A separate study conducted by the Danish government found, “The most environment-friendly way to carry groceries is to use the same bag over and over again…the best reusable ones are made from polyester or plastics like polypropylene.”

Monday, April 15 is Tax Day in the United States. Below is an excerpt from a radio show:

“Vanek Smith: Joe and his California tax team are eating lunch and talking shop. And they tell Joe they have this idea, an idea they think would save California a bunch of money and time and help taxpayers. They say, most people in California have really simple taxes. They get all of their income from a regular paycheck, and taxes are already withheld from those paychecks.

Bankman: So their idea was – why don't we start off giving them a tax return that's already filled out with the income we know they have? And then they can make corrections on it. That was their idea…

Vanek Smith: So they did a pilot program in California. In the 2004 tax season, they sent [completed forms] out to about 11,000 taxpayers along with this little survey.

Bankman: So we asked people, do you think you'd like to use this again next year? And 99 percent of the people said yes. Ninety-nine percent of people don't say yes to anything.”

Our Sources, interest in reading more?
* These views are those of Peak Advisor Alliance, and not the presenting Representative or the Representative’s Broker/Dealer, and should not be construed as investment advice.
* This newsletter was prepared by Peak Advisor Alliance. Peak Advisor Alliance is not affiliated with the named broker/dealer.
* Government bonds and Treasury Bills are guaranteed by the U.S. government as to the timely payment of principal and interest and, if held to maturity, offer a fixed rate of return and fixed principal value.  However, the value of fund shares is not guaranteed and will fluctuate.
* Corporate bonds are considered higher risk than government bonds but normally offer a higher yield and are subject to market, interest rate and credit risk as well as additional risks based on the quality of issuer coupon rate, price, yield, maturity, and redemption features.
* The Standard & Poor’s 500 (S&P 500) is an unmanaged group of securities considered to be representative of the stock market in general. You cannot invest directly in this index.
* The Standard & Poor’s 500 (S&P 500) is an unmanaged index. Unmanaged index returns do not reflect fees, expenses, or sales charges. Index performance is not indicative of the performance of any investment.
* The Dow Jones Global ex-U.S. Index covers approximately 95% of the market capitalization of the 45 developed and emerging countries included in the Index.
* The 10-year Treasury Note represents debt owed by the United States Treasury to the public. Since the U.S. Government is seen as a risk-free borrower, investors use the 10-year Treasury Note as a benchmark for the long-term bond market.
* Gold represents the afternoon gold price as reported by the London Bullion Market Association. The gold price is set twice daily by the London Gold Fixing Company at 10:30 and 15:00 and is expressed in U.S. dollars per fine troy ounce.
* The Bloomberg Commodity Index is designed to be a highly liquid and diversified benchmark for the commodity futures market. The Index is composed of futures contracts on 19 physical commodities and was launched on July 14, 1998.
* The DJ Equity All REIT Total Return Index measures the total return performance of the equity subcategory of the Real Estate Investment Trust (REIT) industry as calculated by Dow Jones.
* Yahoo! Finance is the source for any reference to the performance of an index between two specific periods.
* Opinions expressed are subject to change without notice and are not intended as investment advice or to predict future performance.
* Economic forecasts set forth may not develop as predicted and there can be no guarantee that strategies promoted will be successful.
* Past performance does not guarantee future results. Investing involves risk, including loss of principal.
* You cannot invest directly in an index.
* Consult your financial professional before making any investment decision.
* Stock investing involves risk including loss of principal.
Additional Sources: