It Wasn’t Just The Price Of Pork Chops

So far, 25 percent of the companies in the Standard & Poor’s (S&P) 500 Index have reported first quarter earnings, and 84 percent said profits grew faster than expected, reported John Butters of FactSet. The blended earnings growth rate for the S&P 500 (which includes estimated earnings for companies that have not yet reported and actual earnings for companies that have) was 33.8 percent last week. For context, the 5-year average earnings growth rate (actual earnings) for the S&P 500 was 6.9 percent as of last week.

It’s important to remember the impact of earnings is often muted as earnings expectations – good or bad – tend to be priced into the market long before they are reported.

Investors were concerned about inflation – and so were consumers. While the Federal Reserve and many economists believe we’ll see a fleeting uptick in inflation, others think the increase will persist. “…A consistent drumbeat of price hikes from major companies, consumer reports, and market data suggest the world may not be going along with their conclusion,” reported Dion Rabouin of Axios.

It is likely markets may pay particularly close attention to Federal Reserve statements about inflation and interest rates this week.

Rising numbers of Covid-19 cases around the world tipped the scales.

Concerns about India’s coronavirus surge, Japan’s state of emergency, and rising numbers of cases around the world caused investors to reassess expectations and some sold shares of companies that were expected to benefit from the re-opening of world economies. Yun Li and Maggie Fitzgerald of CNBC reported:

“The sell-off in shares that are tied to a successful reopening came as the World Health Organization warned that global coronavirus infections were edging toward their highest level in the pandemic. In the United States, while the country is maintaining a pace of 3 million reported vaccinations per day, about 67,100 daily new infections are still being recorded.”

Despite uncertainties, most (67 percent) professional investors who participated in Barron’s Big Money Poll said they were bullish on the outlook for stocks in the next 12 months. Just 7 percent were bearish. 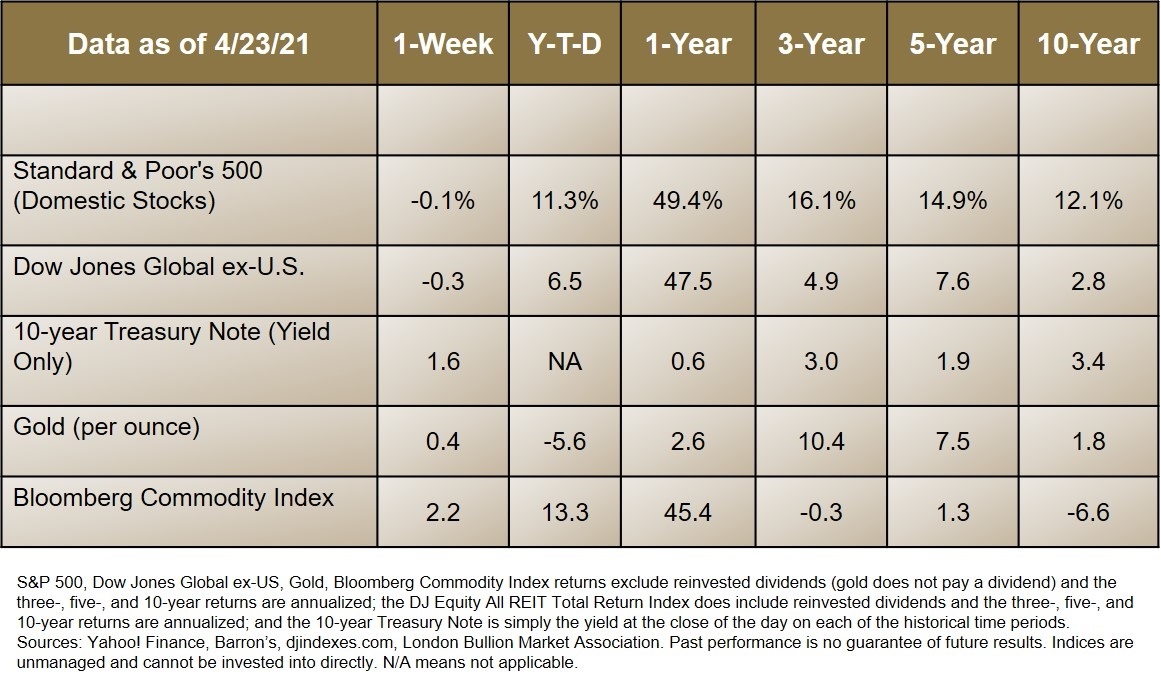 A Capital Gains Tax Hike Has Been Proposed

“President Joe Biden made no secret of his plan to raise capital-gains taxes on the very wealthy. It was a campaign pledge, one that got enough attention for Goldman Sachs to release a note looking at the historical impact of previous increases on the stock market. (The answer: not very much.)”

According to Steve Goldstein of MarketWatch, the Goldman note reported the wealthiest U.S. households sold 1 percent of their equity assets prior to the 2013 capital gains tax increase. As a result, the S&P 500 Index experienced a short-lived loss six months prior to the tax hike and, six months after the tax hike, the Index was back in positive territory.

While the long-term impact on stock markets may be relatively small, the effect on high income investors could be significant.

The administration proposal, as written, would nearly double the capital gains tax rate for people with adjustable gross income of $1 million or more. (That’s about 0.3 percent of American taxpayers.) The current top long-term capital gains tax rate would increase from 20 percent to 39.6 percent, reported Laura Davison and Allyson Versprille of Bloomberg.

The capital gains tax increase is a proposed change. It has not been finalized, and there are indications the final tax may be lower if the bill is passed.

If you’re concerned about the potential tax increase and would like to learn more, please get in touch.