Last Week, The Third Quarter Of 2020 Came To An End – And The Fourth Quarter Delivered A Doozy Of An

President Trump has the coronavirus

On Friday Americans awoke to the news President Trump had contracted COVID-19. Financial markets responded with relative equanimity. After a brief sell-off on Friday, major U.S. indices finished the week, and the third quarter, higher.

U.S. stock markets moved higher in July and August. Then, in early September, investors became skittish and major U.S. indices recorded losses for several weeks. The surge of uncertainty may have resulted from changing vaccine expectations, concerns about earnings, fears of a disputed election, and lack of new stimulus, reported Ben Levisohn of Barron’s.

The Federal Reserve committed to low rates for a long time

The Federal Reserve’s changing policies may have had an influence on markets, as well. The Fed intends to keep interest rates near zero for the foreseeable future. The Federal Open Market Committee (FOMC) statement provided a big picture explanation, “The path of the economy will depend significantly on the course of the virus. The ongoing public health crisis will continue to weigh on economic activity, employment, and inflation in the near term, and poses considerable risks to the economic outlook over the medium term.”

Yields on 10-year U.S. Treasuries moved in a narrow range during the quarter, finishing near where they started.

Additional stimulus measures were expected early in the third quarter, after CARES Act provisions ran dry in July. However, better-than-expected economic data and a reluctance to increase the burgeoning budget deficit made some in Congress adopt a wait-and-see approach, reported Victor Reklaitis of MarketWatch.

By last Friday, stimulus negotiations appeared to have stalled again. However, there were new calls for action over the weekend, following Friday’s weaker-than-expected employment report, according to Jacob Pramuk of CNBC.

The pace of recovery may be slowing

Throughout the third quarter, employment improved steadily. In July it was 10.2 percent. By September, it had fallen to 7.9 percent. While continued improvement is important, the pace of jobs creation slowed last month. Consensus estimates for September suggested the economy would produce 850,000 new jobs. It came up short at 661,000. That could be a sign economic growth is slowing.

During the second quarter (April through June), the U.S. economy shrank by about a third (-31.7 percent). Data for third quarter economic growth is not yet available, but it is expected to show a significant improvement. The Atlanta Federal Reserve’s GDPNow estimates third quarter growth could be as high as 34.6 percent.

While a double-digit rebound would be welcome news, Aaron Weitzman of The Bond Buyer pointed out a 34.6 percent rebound does not offset a 31.7 percent contraction. The economy needs to grow by 46 percent to get back to even.

Volatility Is Likely to Continue

Global markets may be volatile through the end of 2020. 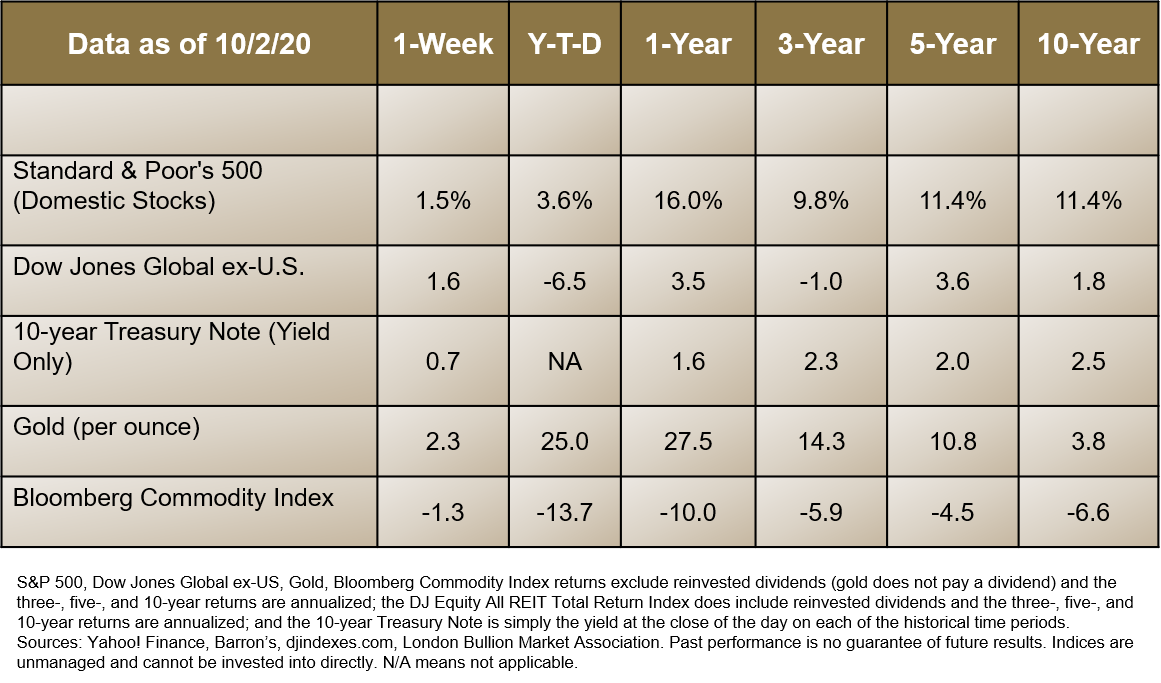 Almost everyone has come across a test question they couldn’t answer. Some ingenious souls provide their teachers with some humor instead. British author Richard Benson asked teachers to share their favorite wrong test answers, and he shared a few with Business Insider:

Q: When did the founding fathers draft the Constitution?

A: It was a second round pick, right after LeBron James.

Q: Describe what is meant by “forgetting.”

A: I can’t remember.

Q: What is a nitrate?

A: It is much cheaper than a day rate.

Q: Upon ascending to the throne, the first thing Queen Elizabeth II did was to…

Q: Where was the Declaration of Independence signed?

A: At the bottom.

“You pay a very high price for a cheery consensus. It won't be the economy that will do in investors; it will be the investors themselves. Uncertainty is actually the friend of the buyer of long-term values.”