Viruses can also affect companies and share values. However, not every investment will move in the same direction at the same time, and not every country or industry will be affected in the same way. Barron’s reported:

“SARS infected more than 8,000 people in 2003, killing more than 770. The outbreak occurred between November 2002 and July 2003. Stocks of U.S. airlines – a proxy for travel-related shares – dropped more than 30 percent from pre-SARS highs during that outbreak, about twice the decline of the broader S&P 500 index. All stocks, it appears, were impacted by the outbreak. It took about three months for shares to bottom and another three months to achieve previous highs.”

China responded to the outbreak by imposing a transportation lockdown, and that could affect China’s economic growth. S&P Global explained:

“The coronavirus is hitting China during Lunar New Year, a period when households tend to spend more on travel, entertainment, and gifts. Even if the virus is contained fairly quickly, the initial stages of high uncertainty are likely to affect spending.”

In addition, the city of Wuhan, where the outbreak began, is a major transportation hub and a center for auto production. It is China’s sixth largest city, home to 11 million people, and responsible for 1.6 percent of the country’s economic growth. 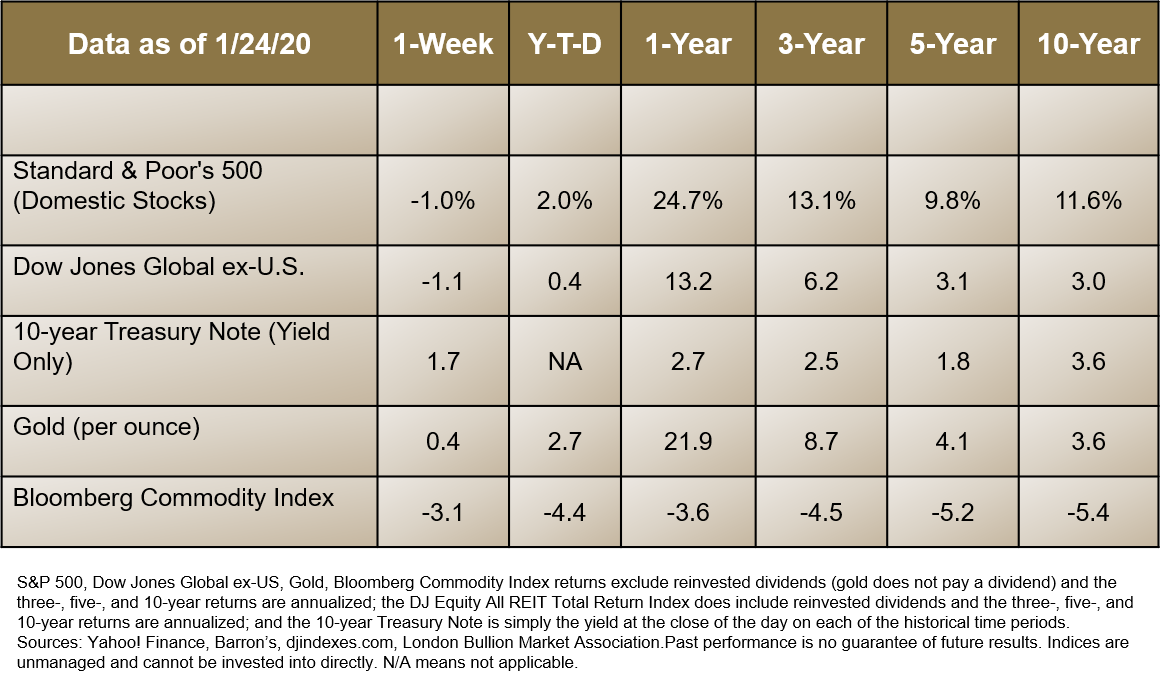 A Decade of Words.

Time Magazine puts a ‘Person of the Year’ on its cover. ESPN awards ESPYs to athletes annually. Nobel and Ig Nobel committees recognize the worthy and the unsuspecting. Merriam Webster selects a ‘Word of the Year.’ It is the word dictionary users searched for more than they had in previous years. Here are the words of the year from the last decade:

2010: Austerity, noun, “The quality or state of being austere, a stern and serious quality, a plain and simple quality.”

2011: Pragmatic, adjective, “Relating to matters of fact or practical affairs often to the exclusion of intellectual or artistic matters: practical as opposed to idealistic.”

2012: Socialism, noun, “Any of various economic and political theories advocating collective or governmental ownership and administration of the means of production and distribution of goods,” tied with Capitalism.

2013: Science, noun, “The state of knowing: knowledge as distinguished from ignorance or misunderstanding.”

2014: Culture, noun, “The customary beliefs, social forms, and material traits of a racial, religious, or social group, also the characteristic features of everyday existence (such as diversions or a way of life) shared by people in a place or time.”

2015: -ism, noun suffix, “Manner of action or behavior characteristic of a (specified) person or thing, or prejudice or discrimination on the basis of a (specified) attribute.” (The most looked up words were socialism, fascism, racism, feminism, communism, capitalism, and terrorism.)

2016: Surreal, adjective, “Marked by the intense irrational reality of a dream.”

2017: Feminism, noun, “The theory of the political, economic, and social equality of the sexes; organized activity on behalf of women's rights and interests.”

2018: Justice, noun, “The maintenance or administration of what is just especially by the impartial adjustment of conflicting claims or the assignment of merited rewards or punishments.”

2019: They, pronoun, “Those ones: those people, animals, or things.” The definition was expanded to, “Used to refer to a single person whose gender identity is nonbinary.”

“We think of English as a fortress to be defended, but a better analogy is to think of English as a child. We love and nurture it into being, and once it gains gross motor skills, it starts going exactly where we don't want it to go: it heads right for the…electrical sockets. We dress it in fancy clothes and tell it to behave, and it comes home with its underwear on its head and wearing someone else's socks. As English grows, it lives its own life, and this is right and healthy. Sometimes English does exactly what we think it should; sometimes it goes places we don't like and thrives there in spite of all our worrying. We can tell it to clean itself up and act more like Latin; we can throw tantrums and start learning French instead. But we will never really be the boss of it. And that's why it flourishes.”