The Event At The United States Capitol Building Had A Resounding Impact Around The World, But It Did

Last week, investors weighed the violent disruption of America’s 2020 presidential election process against the outcome of the Senate runoff in Georgia, and decided the latter was more significant. Financial Times reported the Democratic party’s win in Georgia improves the possibility of additional government relief spending in 2021:

“In turn, this renews the momentum behind trends within equity and bond markets that have been unfolding in recent months. These include rising long-term interest rates and inflation expectations that reflect hopes of an accelerating economy later this year.”

Last week, the yield on 10-year U.S. Treasuries moved above 1 percent for the first time since March 2020, closing on Friday at 1.13 percent.

Disappointing employment numbers may provide an impetus for additional government stimulus measures. Last Friday, the U.S. Bureau of Labor Statistics reported the loss of 140,000 U.S. jobs in December 2020. It was the first decline in eight months, reported MarketWatch, and resulted from a surge of coronavirus cases across the country. The unemployment rate remained unchanged at 6.7 percent.

Global stock markets also moved higher. A strategist cited by Financial Times commented, “The only noise in markets…was a bullish stampede as [they] continued their strong start to 2021.” 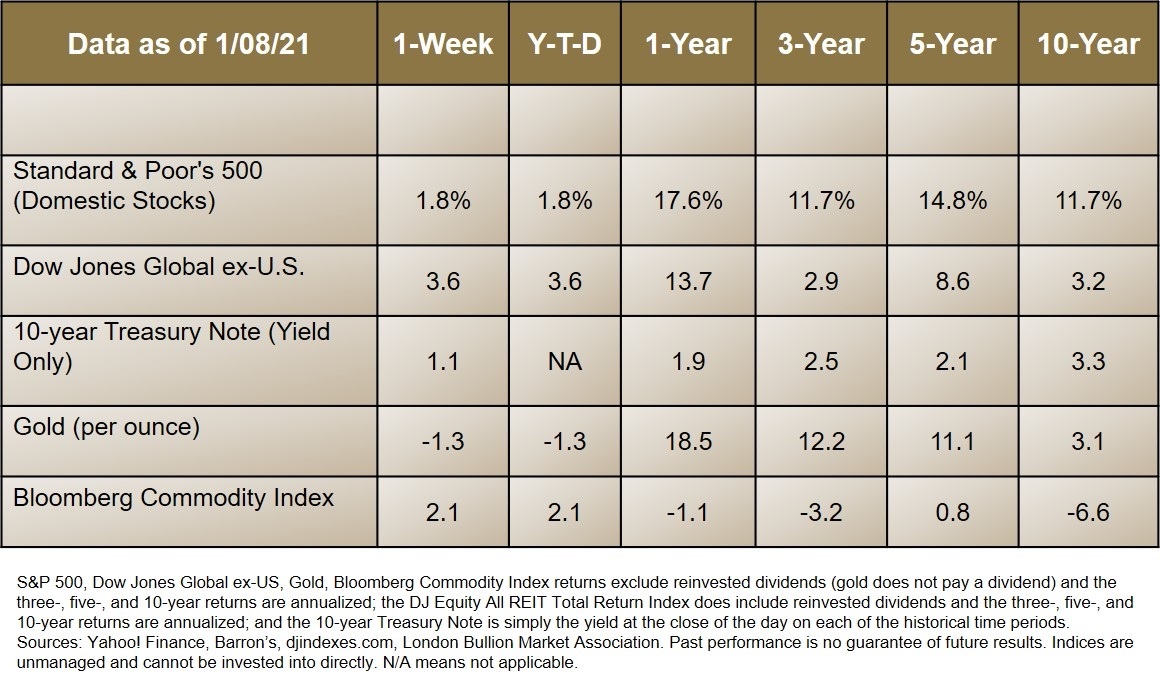 If you’re a student of language or just interested in words, the term ‘melt-up’ is a bit mystifying. The base word – melt – conjures visions of ice cream and glaciers. Meltdown also is clear. It brings to mind tantrums and nuclear reactor disasters. The apparent opposite, melt-up, begs the question – is it even possible for something to melt-up?

In the stock market, the answer is yes.

A melt-up occurs when share or index prices move sharply higher for reasons that have little to do with fundamentals (e.g., profits, revenues, assets, liabilities, potential growth).

Last week, The Economist reported, “In short, the conditions seem ripe for further stock market gains. So ripe, indeed, that a persistent thought keeps surfacing in the minds of strategists. What is to stop stock prices worldwide going on a really crazy run? Several things could get in the way of a market melt-up.”

Among the obstacles that could hinder a melt-up, The Economist cites:

There is no disputing some indexes in the United States are at record highs. It is less certain what will happen in 2021.

In early December 2020, MarketWatch published an article by Robert Shiller, Laurence Black, and Farouk Jivraj. They wrote high prices may be warranted, as long as bond yields remain low. “Eventually, down the line, bond yields may just rise, and equity valuations may also have to reset alongside yields. But, at this point, despite the risks and the high CAPE ratios, stock-market valuations may not be as absurd as some people think.”

Last week, the real yield (the yield after inflation) for 10-year U.S. Treasuries was -0.93 percent. That’s pretty low, but it’s better than it was the previous week.

“People generally see what they look for and hear what they listen for.”