The First Quarter Of 2019 Brought A Welcome Reversal.

Last year, Barron’s published a group of market strategists’ expectations for 2019 performance. The article came out in mid-December, before the steep year-end stock market decline. At that time, all of the strategists agreed: The S&P 500 Index would move higher during 2019.

Their expectations appeared to be wildly optimistic when the Index lost 3.5 percent during the last two weeks of 2018, and finished the year down 6.2 percent.

Overall, at the end of 2018, strategists expected the Index to reach 2,975 by year-end 2019. Despite starting 2019 at a lower level than many anticipated, the Index finished last week at 2,892, a gain of about 15.4 percent year-to-date, and 83 points from strategists’ full-year performance expectations.

While the U.S. stock market has delivered attractive returns year-to-date, suggesting investors anticipate strong economic growth ahead, the bond market has been telling a different story.

In some cases, inverted yield curves have been a sign that recession is ahead. That may not be the case this time, reported Eva Szalay of Financial Times. It seems the extreme measures taken by central banks following the financial crisis may have undermined the yield curve’s predictive value:

“…according to a new piece of research from Pictet Wealth Management, the curve has been sending out misleading signals for a while. The distortions created by extraordinary post-crisis monetary policies have led to the breakdown in the relationship between interest rate expectations and economic growth, the firm argues…Since central banks have injected vast amounts of liquidity into their respective economies to compensate for lackluster growth, long-term interest rates have become artificially compressed…So the old rule no longer applies.”

The yield curve has since righted itself.

While recession may not be imminent, there are signs economies around the world are growing more slowly. Capital Economics reported, “World GDP [gross domestic product] growth seems to have slowed sharply in Q1, but the latest business surveys suggest that growth has bottomed out in some parts of the world at least…there are very few signs of improvement in the euro-zone and the United States has clearly been suffering from previous interest rate hikes and the fading fiscal boost. Those hoping for an imminent rebound in global growth are therefore likely to be disappointed.”

Slowing growth isn’t a sign recession is imminent in the United States. Last week’s jobs report suggests the American economy is still healthy, reported Tim Mullaney of MarketWatch, even if it is puttering along at a slower pace than many would like. 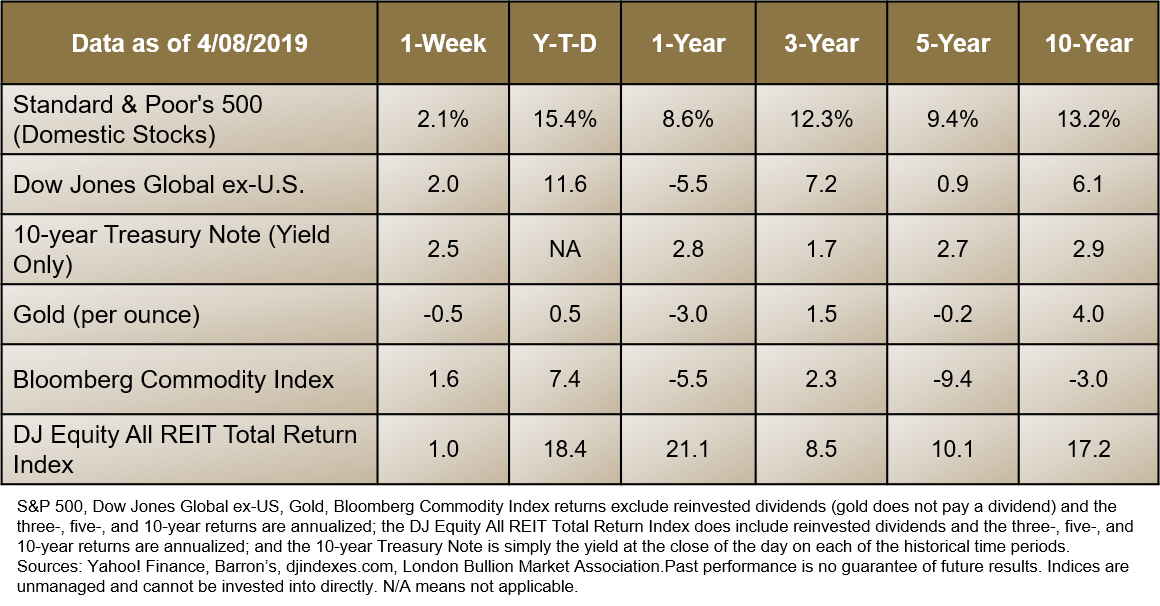 Researchers tested the relationship between mental health and exercise by collecting self-reported data from 1.2 million Americans. They discovered exercise – including everything from childcare and housework to weight lifting and running – can improve mental health.

Americans who were active tended to be happier and experienced poor mental health about 35 days a year. In contrast, those who remained inactive felt bad emotionally about 53 days a year, reported Entrepreneur.com. Exercising in a social setting – team sports, classes, and group cycling, for instance – appeared to deliver the biggest mental health benefits.

The study’s findings indicated it might be possible to exercise too much. “Exercising for 30-60 minutes was associated with the biggest reduction in poor mental health days…Small reductions were still seen for people who exercised more than 90 minutes a day, but exercising for more than three hours a day was associated with worse mental health than not exercising at all. The authors note that people doing extreme amounts of exercise might have obsessive characteristics which could place them at greater risk of poor mental health.”

If you’re not exercising regularly, you may want to find ways to include it in your day.

“I have always tried to put my kids first, and then…put myself a really close second, as opposed to fifth or seventh. One thing that I've learned from male role models is that they don't hesitate to invest in themselves, with the view that, if I'm healthy and happy, I'm going to be a better support to my spouse and children. And I've found that to be the case: Once my kids were settled, the next thing I did was take care of my own health and sanity. And made sure that I was exercising and felt good about myself. I'd bring that energy to everything else that I did, the career, relationship, on and on and on.”