The shortest bear market in history is over.

The Nasdaq Composite and Standard & Poor’s 500 Indices finished at new highs last week. The stock market is considered to be a leading economic indicator, so strong stock market performance suggests economic improvement ahead.

There was a caveat to last week’s gains, though. One large technology company was responsible for 60 percent of the S&P’s weekly gains (0.7 percent), reported Ben Levisohn of Barron’s. The same large company is also a component of the Dow Jones Industrials Index, which finished the week flat. Without that stock, the Dow would have finished the week lower. Levisohn wrote:

“The S&P 500 might have hit a record last week, but most stocks have been having bad days. On Friday, for instance, just 220 stocks in the S&P 500 closed higher for the day, and that was far from an anomaly. The S&P 500’s cumulative advance/decline line – a measure of the number of stocks finishing higher versus those finishing lower that technicians use to gauge the market’s underlying strength – has been falling even as the S&P 500 progressed to a record.”

One reason for the U.S. stock market’s rise to date may be dividends, reported Lawrence Strauss of Barron’s. “…equities remain attractive relative to 10-year U.S. Treasuries. The yield on that bond was recently at 0.67 percent, about one percentage point below the S&P 500’s yield.”

The story told by last week’s jobs data was as uncertain as the one told by the U.S. stock market. The Department of Labor reported jobless claims moved higher with 1.1 million people filing new claims for the week of August 15. During the previous week, new claims had fallen below one million. The four-week moving average for new claims continued to trend lower.

There was also a decline in the number of jobs posted. (Job postings provide insight to labor market activity in real time.) The Indeed Hiring Lab reported postings were down more than 20 percent year-over-year as of August 14, 2020. It was the first decline in the number of job listings since April 2020. Fewer jobs were available in hospitality, tourism, childcare, banking, finance, and software development. 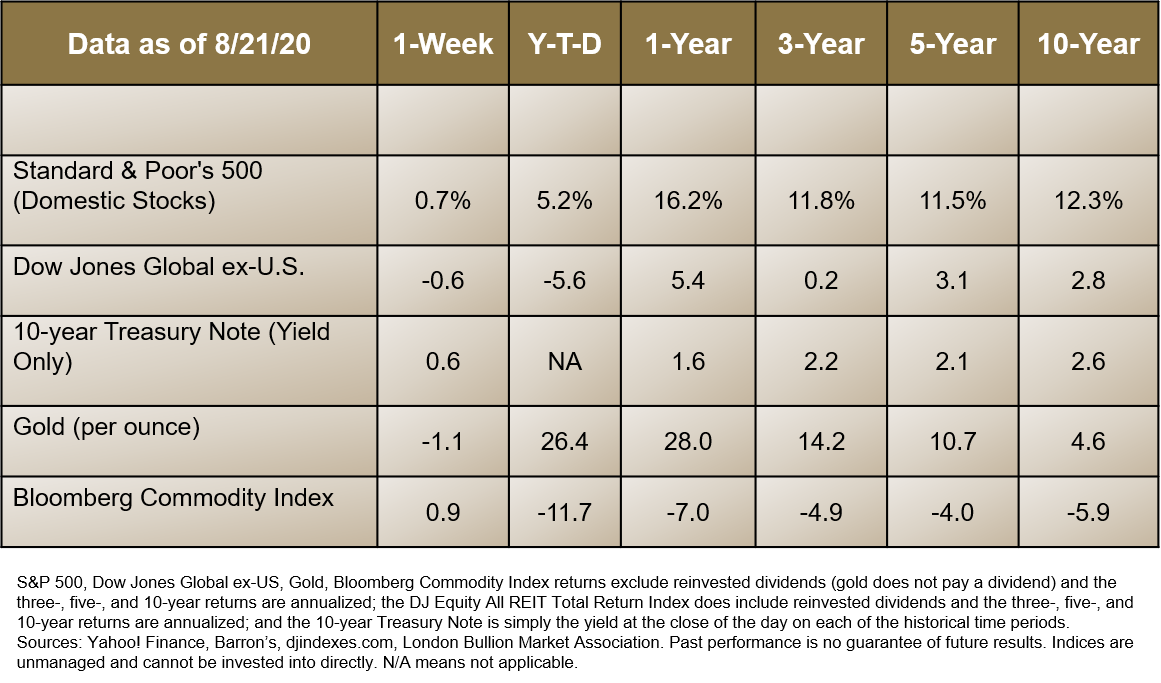 The Annals of Improbable Research publishes “…research that makes people LAUGH, then THINK. Real research, about anything and everything, from everywhere – research that’s maybe good or bad, important or trivial, valuable or worthless.” In that spirit, here are a few notable scientific studies that may inspire awe and/or skepticism:

“There will come a time when you believe everything is finished. That will be the beginning.”

* These views are those of Peak Advisor Alliance, and not the presenting Representative or the Representative's Broker/Dealer, and should not be construed as investment advice.

* Government bonds and Treasury Bills are guaranteed by the U.S. government as to the timely payment of principal and interest and, if held to maturity, offer a fixed rate of return and fixed principal value.  However, the value of fund shares is not guaranteed and will fluctuate.

* Corporate bonds are considered higher risk than government bonds but normally offer a higher yield and are subject to market, interest rate and credit risk as well as additional risks based on the quality of issuer coupon rate, price, yield, maturity, and redemption features.

* The Standard & Poor's 500 (S&P 500) is an unmanaged group of securities considered to be representative of the stock market in general. You cannot invest directly in this index.

* The Standard & Poor's 500 (S&P 500) is an unmanaged index. Unmanaged index returns do not reflect fees, expenses, or sales charges. Index performance is not indicative of the performance of any investment.

* The Dow Jones Global ex-U.S. Index covers approximately 95% of the market capitalization of the 45 developed and emerging countries included in the Index.

* Gold represents the afternoon gold price as reported by the London Bullion Market Association. The gold price is set twice daily by the London Gold Fixing Company at 10:30 and 15:00 and is expressed in U.S. dollars per fine troy ounce.

* The Bloomberg Commodity Index is designed to be a highly liquid and diversified benchmark for the commodity futures market. The Index is composed of futures contracts on 19 physical commodities and was launched on July 14, 1998.

* The DJ Equity All REIT Total Return Index measures the total return performance of the equity subcategory of the Real Estate Investment Trust (REIT) industry as calculated by Dow Jones.

* Yahoo! Finance is the source for any reference to the performance of an index between two specific periods.

* Opinions expressed are subject to change without notice and are not intended as investment advice or to predict future performance.

* Economic forecasts set forth may not develop as predicted and there can be no guarantee that strategies promoted will be successful.

* Past performance does not guarantee future results. Investing involves risk, including loss of principal.

* You cannot invest directly in an index.

* Consult your financial professional before making any investment decision.