There Was Good News and Bad News In Last Week’s Employment Report.

The good news was the U.S. Bureau of Labor Statistics delivered better-than-expected data about employment. In July, the U.S. economy added about 1.8 million new jobs.

That’s about 300,000 more than the Wall Street consensus forecast, according to Jeff Cox of CNBC, who reported, “…there were wide variations around the estimates as the pandemic’s resurgence dented plans to get the shuttered U.S. economy completely back online. Forecasts ranged from a decline of half a million jobs to a rise of 3 million…”

The bad news is that, despite declining unemployment numbers, the U.S. unemployment rate is now at 10.2 percent – a level that rivals unemployment during the 1981-82 recession and the Great Recession. On Friday, Matthew Klein of Barron’s explained:

“The July data were better than feared, but that doesn’t mean the U.S. economy is in good shape. The danger now is that the private sector’s slowing momentum will be exacerbated by ongoing state and local government retrenchment and the expiration of emergency unemployment benefits that had been supporting disposable income.”

It is also possible benefits won’t restart until Congress reaches agreement. “Although [President Trump] signed an order to provide enhanced unemployment benefits to millions of out-of-work Americans, it’s unclear if he has the authority to do so by executive order while side-stepping Congress. And, it could take months for states to implement,” reported Jessica Menton of USA Today. 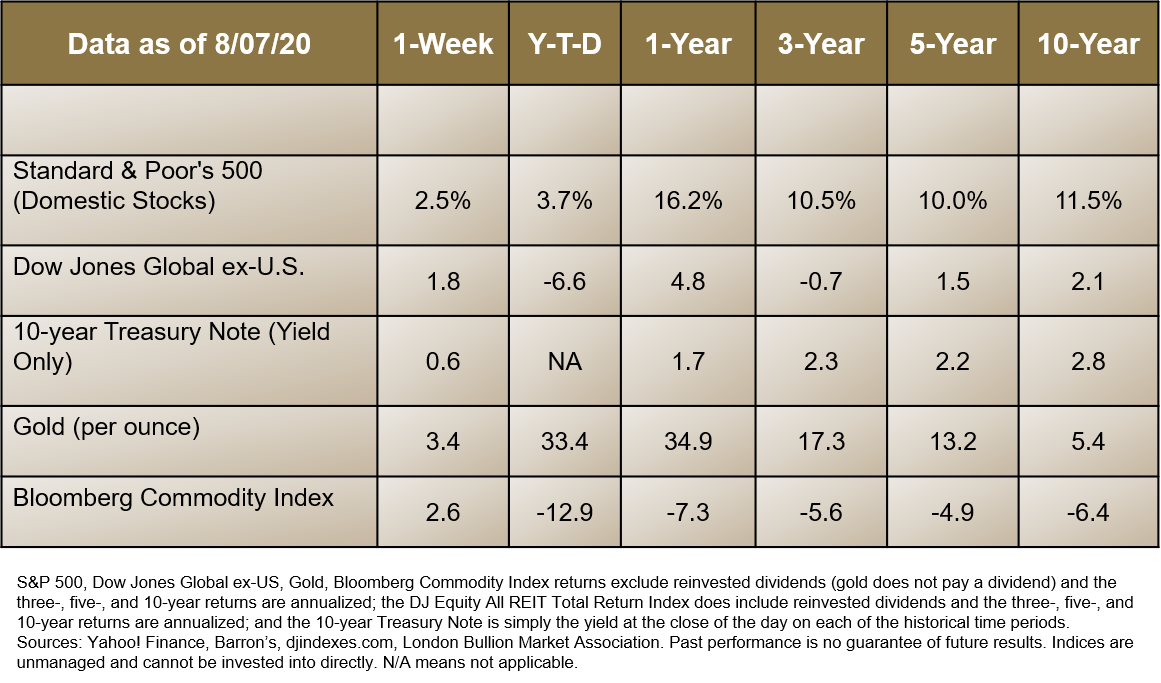 As professional sports resume play in empty stadiums, teams are finding innovative ways to support and encourage players and, sometimes, viewers. For instance:

You may not have noticed, but there is a coin shortage in the United States. National Public Radio explained:

“Supermarkets and gas stations across the U.S. are asking shoppers to pay with a card or produce exact change when possible. [A big box store] has converted some of its self-checkout registers to accept only plastic. [A grocery chain] is offering to load change that would normally involve coins onto loyalty cards.”

Social distancing, and other safety measures taken to slow the spread of COVID-19, also slowed the U.S. Mint’s coin production. In June, the Federal Reserve began rationing coins, and convened a task force to investigate the issue.

With coins in the public eye, it may be time to resurrect the ‘Kill the penny’ movement, suggested Greg Rosalsky of Planet Money.

In 2019, 60 percent of the coins produced by the U.S. Mint were pennies. The majority of the Mint’s coin-producing time was spent making about seven billion pennies. The problem is pennies cost more to produce than they are worth as currency.

According to the U.S. Mint’s 2019 Annual Report, “The unit cost for both pennies (1.99 cents) and nickels (7.62 cents) remained above face value for the fourteenth consecutive fiscal year.” In other words, the Mint lost more than $72 million making pennies last year.

How often do you use pennies and nickels?

“Outstanding leaders go out of their way to boost the self-esteem of their personnel. If people believe in themselves, it's amazing what they can accomplish.”

https://www.barrons.com/market-data?mod=BOL_TOPNAV (or go to https://peakcontent.s3-us-west-2.amazonaws.com/+Peak+Commentary/08-10-20_Barrons-Market_Data-Footnote_9.pdf)