Major U.S. stock indices moved lower when trade talks between the United States and China broke down. The Standard & Poor’s (S&P) 500 Index, Nasdaq Composite, and Dow Jones Industrial Index all finished the week down between 2 percent and 3 percent, reported Ben Levisohn of Barron’s.

Despite the weak weekly performance, the S&P 500 remains up 14.9 percent year-to-date.

The deadline to settle U.S.-China trade issues was Friday. When it passed without any resolution, the U.S. increased tariffs on Chinese goods to 25 percent, reported the BBC.

The economic impact of higher tariffs may be relatively small; however, the impact on business confidence and global markets could be significant, reported Capital Economics.

“We think that the direct effects of President Trump’s threatened tariff hikes could reduce Chinese GDP by up to 0.4 percent and that the associated retaliation would have only a marginal direct impact on the United States. The effects on business confidence and financial markets around the world could be more significant, potentially adding to reasons for renewed policy loosening…In theory, if all else were unchanged, the increase in tariffs would amount to a small fiscal tightening in China and the United States. But both governments have avoided this by spending the proceeds on aid for the most affected parties.”

Bond markets reflected uncertainty, too. The yield curve, which has been flirting with inversion for some time, inverted briefly on Thursday, reported Alex Harris of Bloomberg. A persistent inverted yield curve – featuring a lower yield for 10-year Treasuries than for three-month Treasuries – sometimes signals recession.

David Lynch and Heather Long of The Washington Post reported tariffs imposed on other countries have yet to be removed, including those on steel and aluminum imported from Mexico and Canada.

Trade negotiations between the United States and China are expected to continue. 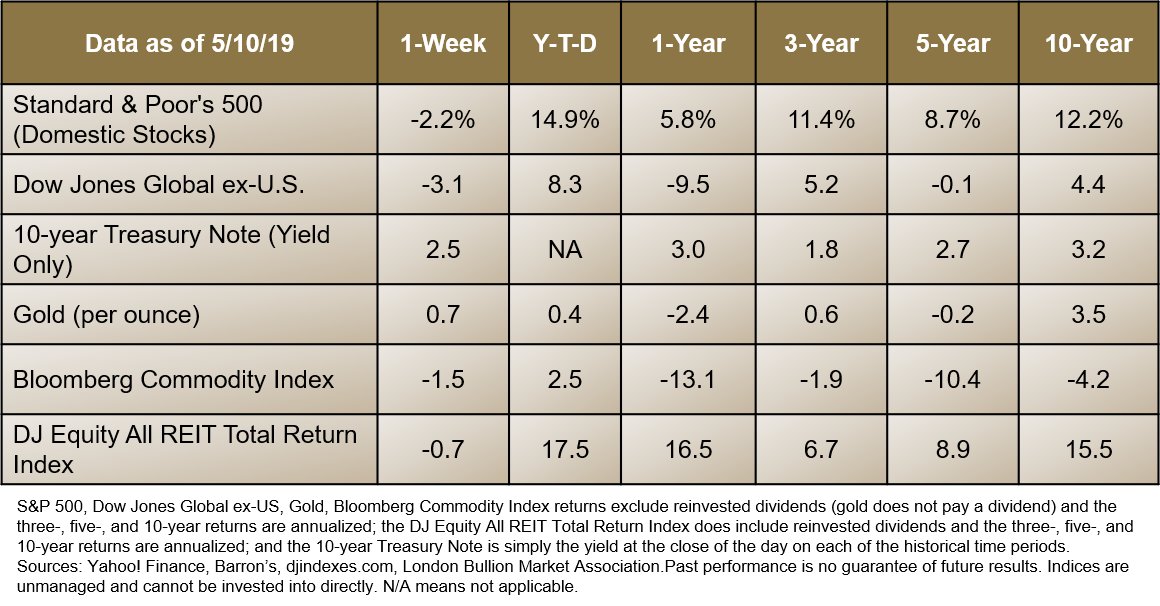 In The Wisdom of Crowds, James Surowiecki shared a story about Francis Galton, a Victorian-era statistician and scientist whose “…experiments left him with little faith in the intelligence of the average person.”

Jacob Goldstein and David Kestenbaum of Planet Money summarized the story like this:

“One day, Galton goes to a country fair. This was about a hundred years ago in England. And there's this contest going on at the fair – guess the weight of the ox. Galton's a scientist and a statistician. And he figures, hey, I can do an experiment here, right? He figures, I'm going to take everyone's guesses, take the average and compare that to the actual weight of the ox…The ox weighed 1,198 pounds.”

The average of the estimates was 1,197 pounds. The result surprised Galton and it surprises other people who hear the story, too.

Goldstein and Kestenbaum decided to replicate the experiment by visiting a fair, weighing a cow, posting a picture of the cow online (next to a photo of Goldstein that shared his weight), and asking people to estimate the cow’s weight.

After removing outliers, the average estimate of the cow’s weight came in at 1,287 pounds. The cow weighed 1,355 pounds.

How can a group of people, few of whom knew anything about cows, get so close to a correct answer? The key is that each guess is made independently:

“…Every person's guess is contributing some new, little piece of information. Everybody is different. Everybody thinks slightly differently when they're trying to guess the cow's weight. Maybe one person studies that photo of the cow from the side. Some people are probably trying to figure out how many Jacobs would fit in the cow. Someone else might know how much a horse weighs and kind of go from there.”

That’s not to say collective thinking is always accurate. There are terms in our vocabulary – mob mentality, herd thinking, groupthink, and others – that often are used to describe groups getting it wrong.

Consider the stock market. You don’t need to look far to find examples of what can happen when people push a company’s share price or a stock market to an unreasonable level.

Apparently, the wisdom of the crowd is found in thinking independently, together.

“In a basic agricultural society, it's easy enough to swap five chickens for a new dress or to pay a schoolteacher with a goat and three sacks of rice. Barter works less well in a more advanced economy. The logistical challenges of using chickens to buy books on Amazon.com would be formidable.”