There was some good news on trade, last week. The United States took steps to reduce trade friction with the European Union, Canada, Mexico, and Japan.

“The United States on Friday reached an agreement with Canada and Mexico to remove steel and aluminum tariffs, which had been a persistent source of friction across North America over the past year. The deal on metals came as Mr. Trump decided not to press ahead immediately with levies on EU and Japanese automotive products – despite declaring that foreign car and vehicle imports represented a threat to U.S. national security,” reported James Politi, Jude Webber, and Jim Brunsden of Financial Times.

In addition, President Trump signed an executive order preventing U.S. companies from using telecommunications equipment made by firms believed to pose a risk to national security. The move is expected to affect the ability of a large Chinese telecoms firm to conduct business in the United States, reported David Lawder and Susan Heavey of Reuters.

China currently has tariffs on $110 billion of American goods and they announced plans to hike tariffs on $60 billion of these goods. In total, China imports $120 billion worth of goods overall from the United States each year.

While the relatively small amount of American goods imported by China would seem to give the United States an advantage in a trade war, China has other means of gaining leverage. The country holds about 7 percent of U.S. debt, which is more than any other nation, reported Jeff Cox of CNBC. If China were to slow purchases of Treasuries, yields on U.S. government bonds may move higher.

A source cited by Reshma Kapadia of Barron’s suggested it is unlikely the Chinese will stop buying Treasuries. “Where would they put the trillions of dollars? Ten-year German Bunds are below Japanese 10-year yields; there aren’t a lot of options…They also don’t want their currency to appreciate, so that handcuffs them…China tends to find things to hurt adversaries without hurting themselves.” 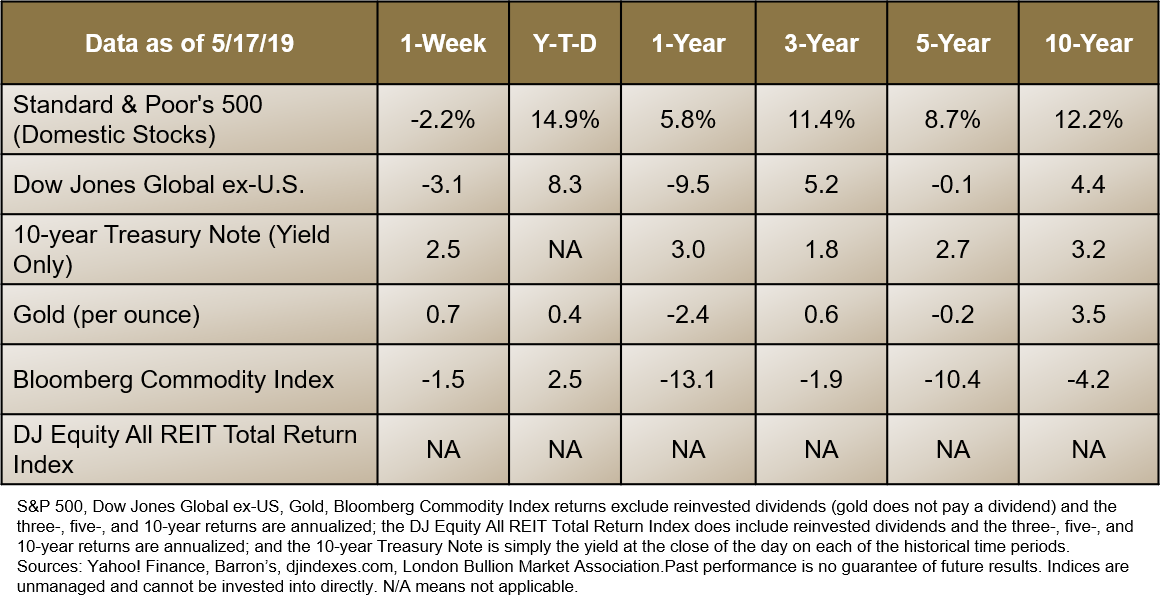 Which Cities offer the best quality of life?

In March, Mercer published its 21st Quality of Living Survey. The goal is to help multinational corporations with data that can help them optimize their global operations. The survey considers factors like safety, housing, recreation, economics, public transport, consumer goods, and more. For 2019, the cities offering the highest quality of life were:

Thirteen of the world’s top-20 cities were in Europe. The safest cities in Europe were Luxembourg, Basel, Bern, Helsinki, and Zurich. The least safe, as far as personal safety goes, were Moscow and St. Petersburg.

In North America, Canadian cities generally did better than U.S. cities. The highest ranked city in the United States was San Francisco, which came in at 34th. Boston ranked 36th and Honolulu 37th. The safest cities in North America were Vancouver, Toronto, Montreal, Ottawa, and Calgary.

Singapore, Tokyo, and Kobe had the highest quality of life rankings among Asian cities. Cities in Australia and New Zealand also did quite well, overall.

“You are all there, the people in the city. I can't believe I was ever among you. When you are away from a city it becomes a fantasy. Any town, New York, Chicago, with its people, becomes improbable with distance. Just as I am improbable here, in Illinois, in a small town by a quiet lake. All of us improbable to one another because we are not present to one another.”