U.S. Stocks Have Had A Great Run.

During the past decade, the profitability of U.S. companies increased rapidly. Strong corporate earnings helped the U.S. stock market outperform markets in other nations by a significant margin. According to Capital Economics, “Since the start of this decade, the average annual return from the MSCI USA index of mid- and large-capitalization U.S. equities, which closely tracks the S&P 500, has been roughly 13 percent. This compares to only 7 percent from the MSCI World ex USA index of comparably-sized equities in 22 other developed economies.” Performance was measured in local currency.

Through the end of April, year-to-date returns for U.S. benchmark indices were soaring. T. Rowe Price reported, “Stocks recorded solid gains in April, continuing their strong start to the year. The S&P 500 and Nasdaq Composite Indexes hit new all‑time highs at the end of the month, while the other major benchmarks remained modestly below the peaks they established in the fall of 2018…Renewed confidence in the global economy seemed to be a primary factor boosting sentiment in April.”

Since early May, when trade discord resumed between the United States and China, major U.S. stock indices have lost value. Ben Levisohn of Barron’s reported the Dow Jones Industrial Average has fallen 3.5 percent since May 5, the Standard & Poor’s 500 Index is down 4.1 percent, and the Nasdaq Composite has surrendered 6.5 percent.

There are reasons to believe stock performance may not be as strong in the future. Last week, there were signs U.S. and global economies may be slowing. Randall Forsyth of Barron’s reviewed some indicators. “Long-term U.S. Treasury yields…fell on Thursday to their lowest levels since October 2017, before ticking up on Friday. At the same time, copper and crude-oil prices fell on the week. Those indicators of economic weakness were underscored by a drop in the flash IHS Markit Purchasing Managers Indexes to a shade above 50, the dividing line between expansion and contraction for the economy. Whatever the factors at work, the U.S. economy is slowing.”

The Federal Reserve Bank of Atlanta’s May 24 GDPNow forecast, which is a weekly estimate of potential economic growth for the year, projected the U.S. economy will grow 1.3 percent in 2019.

After a great decade and a stellar start to 2019, U.S. stock markets may be cooling off. 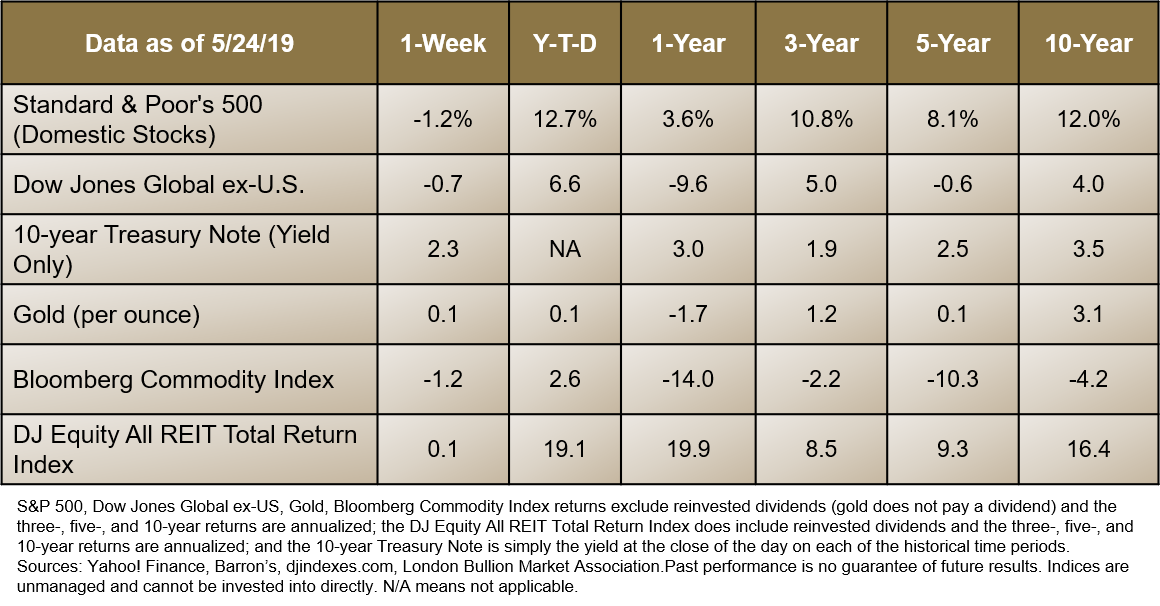 It’s Not Capture The Flag.

Like competitive gaming and Ultimate Frisbee, some may categorize pillow fighting as an activity rather than a sport. Jack Tarrant and Yoko Kono of Reuters described the last week’s All Japan Pillow Fighting Championship qualifier in Shizuoka Prefecture in this way:

“A mix between dodgeball and chess, the aim is to protect each team’s ‘King’ from being hit by pillows whilst trying to hit the opposition’s ‘King’ during two-minute sets. One player on each team can also use a duvet as a shield.”

Japan isn’t the only country to embrace pillow fighting. Since 2008, when International Pillow Fight Day was established, annual pillow fights have been launched in cities around the world, according to Awareness Days. Since the first World Pillow Fight Day in March 2008, the activity has gained popularity “…with pillow fighting flash mobs fighting it out in more and more cities every year…”

NOTE: Pillow fighting is not without risk. In 2015, West Point banned its annual pillow fight after 30 participants were injured.

“The first colleges to make sports a major part of student life, in addition to the Ivies, were the military academies. They did so for some of the same reasons as the elite schools – athletics instilled character, etc. – but also because Army and Navy endorsed the old General Wellington idea that battles were won and lost on the playing fields of youth. The better the sports program, they reasoned, the better the soldier…”

Our Sources, interest in reading more?
* These views are those of Peak Advisor Alliance, and not the presenting Representative or the Representative's Broker/Dealer, and should not be construed as investment advice.
* This newsletter was prepared by Peak Advisor Alliance. Peak Advisor Alliance is not affiliated with the named broker/dealer.
* Government bonds and Treasury Bills are guaranteed by the U.S. government as to the timely payment of principal and interest and, if held to maturity, offer a fixed rate of return and fixed principal value.  However, the value of fund shares is not guaranteed and will fluctuate.
* Corporate bonds are considered higher risk than government bonds but normally offer a higher yield and are subject to market, interest rate and credit risk as well as additional risks based on the quality of issuer coupon rate, price, yield, maturity, and redemption features.
* The Standard & Poor's 500 (S&P 500) is an unmanaged group of securities considered to be representative of the stock market in general. You cannot invest directly in this index.
* The Standard & Poor's 500 (S&P 500) is an unmanaged index. Unmanaged index returns do not reflect fees, expenses, or sales charges. Index performance is not indicative of the performance of any investment.
* The Dow Jones Global ex-U.S. Index covers approximately 95% of the market capitalization of the 45 developed and emerging countries included in the Index.
* The 10-year Treasury Note represents debt owed by the United States Treasury to the public. Since the U.S. Government is seen as a risk-free borrower, investors use the 10-year Treasury Note as a benchmark for the long-term bond market.
* Gold represents the afternoon gold price as reported by the London Bullion Market Association. The gold price is set twice daily by the London Gold Fixing Company at 10:30 and 15:00 and is expressed in U.S. dollars per fine troy ounce.
* The Bloomberg Commodity Index is designed to be a highly liquid and diversified benchmark for the commodity futures market. The Index is composed of futures contracts on 19 physical commodities and was launched on July 14, 1998.
* The DJ Equity All REIT Total Return Index measures the total return performance of the equity subcategory of the Real Estate Investment Trust (REIT) industry as calculated by Dow Jones.
* Yahoo! Finance is the source for any reference to the performance of an index between two specific periods.
* Opinions expressed are subject to change without notice and are not intended as investment advice or to predict future performance.
* Economic forecasts set forth may not develop as predicted and there can be no guarantee that strategies promoted will be successful.
* Past performance does not guarantee future results. Investing involves risk, including loss of principal.
* You cannot invest directly in an index.
* Consult your financial professional before making any investment decision.
* Stock investing involves risk including loss of principal.
Additional Sources: