Wonder What The Federal Reserve’s 40-Yard Dash Time Is?

Wonder What The Federal Reserve’s 40-Yard Dash Time Is?

On Wednesday, the Fed juked like an NFL running back and left investors wondering whether they should buy or sell. Heather Long of The Washington Post reported the U.S. central bank:

Fed Chair Jerome Powell explained, “My colleagues and I have one overarching goal: to sustain the economic expansion with a strong job market and stable prices for the benefit of the American people. The U.S. economy is in a good place and we will continue to use our monetary policy tools to keep it there…We continue to expect that the American economy will grow at solid pace in 2019, although slower than the very strong pace of 2018.”

The Fed’s decision to adopt a looser monetary policy was informed by a variety of factors, including slower economic growth in the United States, China, and Europe, as well as unresolved policy issues like Brexit and ongoing trade negotiations.

Investors weren’t sure what to make of the Fed’s moves. Initially, major U.S. stock indices trended higher as investors celebrated the benefits of accommodative monetary policy. By the end of the week, though, many investors had changed their minds and fled to ‘safe haven’ investments, pushing long-term Treasury rates lower. Alexandra Scaggs of Barron’s reported:

“When short-term yields rise above long-term yields, it’s known as an inverted yield curve, which is seen even by central bankers as a sign that an economic contraction could be on the way…Benchmark 10-year Treasuries rallied Friday morning, driving their yields below those of the three-month U.S. Treasury.”

So, is recession imminent in the United States? It’s possible but unlikely. According to a source cited by Barron’s, the last six times the yield curve inverted for 10 days or longer, recession occurred within the next two years.

No matter how the economy and/or markets perform, it may not be a good idea to make sudden portfolio changes. If you’re feeling uncertain, give us a call. We can discuss changes you may want to make to your portfolio. 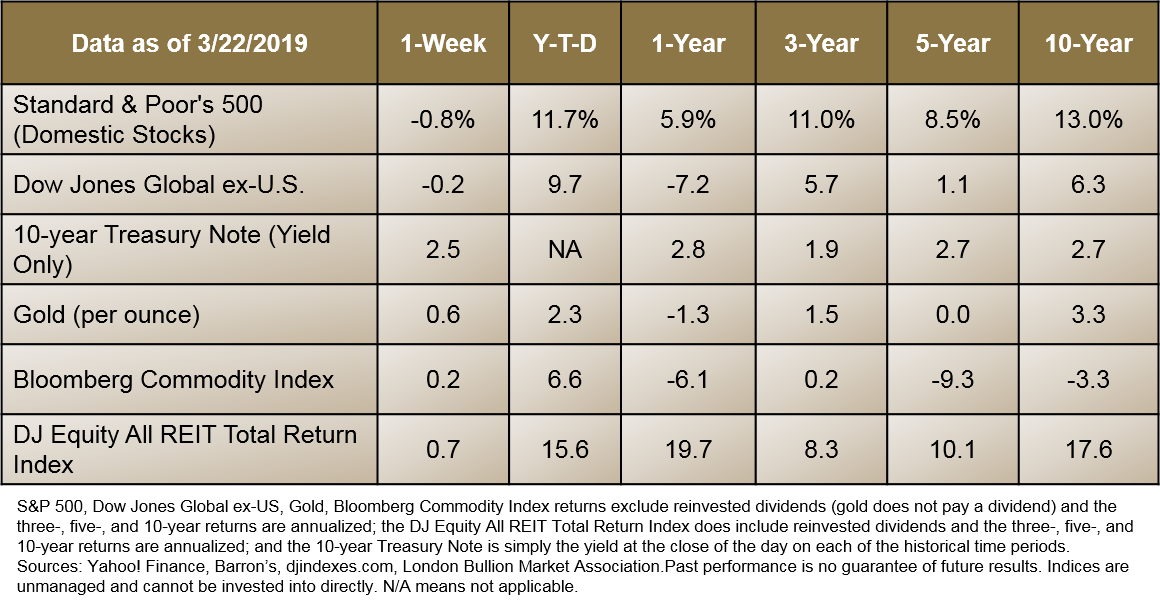 The 2019 United Nation’s World Happiness Report was published last week. The Finns remain the happiest people in the world. In fact, happiness in Finland has been trending higher since 2014.

The report’s authors explained, “…the top countries tend to have high values for most of the key variables that have been found to support well-being: income, healthy life expectancy, social support, freedom, trust, and generosity.”

The 10 happiest countries in the world, according to the report, which aggregated data on 156 countries from Gallup World Polls, are:

The United States came in at #19. Overall, happiness levels in the U.S. have declined by almost 0.5 since the report was first issued. The report stated:

“Several credible explanations have been posited to explain the decline in happiness among adult Americans, including declines in social capital and social support (Sachs, 2017) and increases in obesity and substance abuse (Sachs, 2018)…I suggest another, complementary explanation: that Americans are less happy due to fundamental shifts in how they spend their leisure time…the way adolescents socialize has fundamentally shifted, moving toward online activities and away from face-to-face social interaction.”

“The human race has only one really effective weapon and that is laughter.”